One thing that we get questions (and suggestions) quite frequently is on the topic of weapons. People ask us “what kind of weapons will there be? Will there be more weapons? What about gun customization? What do they look like?” This leads to the inevitable “show me the guns!”

Well today I am happy to answer some of those questions and show off some weapons with some side-by-side comparisons to the original game’s arsenal. The list of weapons is always shifting, growing, and changing. Most of your favorites from the original game are making an appearance alongside some fancy new additions! So to kick things off, if you’re a gun-nut like I am, one of the first things you’ll notice is that the names and brands of the weapons have changed – they are not “real” anymore. Now this is because we’re now working on a commercial product and we have to respect existing copyrights and trademarks. So we’ve made up substitutions; “Beretta” for example becomes “Fierra”, “Glock” substituted with “Eder” and “Ruger” is replaced with “Gruber”. This sort of change is also present in a few of the gun names as well, as some of those too are trademarked. So with that being said, don’t be alarmed when you pick up a firearm with an unfamiliar name!

We’ll start with firearms. The most noticeable change and improvement with the weapons you will see right away that the visuals are of a much higher quality. Our weapon selection was put together as a joint effort between myself and friend of the team Tim Bergholz of Chamfer Zone (www.chamferzone.com), who made most of our firearm art. We worked with the arsenal of the first game and made a few changes and additions, and Tim cranked out some amazing models and textures as we went down the list, and you can see here just how much of a quality improvement his skills have brought to the guns. We’ve put together a few side-by-side comparisons of some select guns from the original game compared to their new equivalents so you can see for yourself, starting with the M16A4: The basics of guns in general function more or less the same as what you’re used to. No on-screen crosshair – requiring you to use ironsights for accuracy, no permanent HUD for ammo – requiring you to do ammochecks, the ability to unload ammo from guns, the ability to perform skillshots, and using flashlights with handguns. On top of all that, though, we’re adding in a few new things too. These two little features alone should add plenty more to the gunplay of NMRiH2. The first new feature is the ability to use “alternate ammo”. For pistol calibers (sans .357 Magnum) that alt-ammo is HP or Hollowpoint; inflicting massive damage to a single soft target. For most rifle calibers (plus .357 Magnum) the alt-ammo is AP or Armor Piercing; dealing huge amounts of damage armored enemies human or zombie and passing through multiple soft targets. A couple rifle calibers have API rounds, or Armor Piercing Incendiary which is exactly what it sounds like. And finally we have 12-gauge shotguns shells which, to make the shotgun class of weapons more versatile, come in buckshot, slug, and finally dragon’s breath. This feature is still hugely work in progress and is subject to change like everything else, but that’s the intention! The second new feature is gun customization. If you’re familiar with Crysis, our system works similarly. You can enable on-the-spot gun customization allowing you to attach suppressors, tactical lights, sights, and more to your firearms. Every firearm is different with what options are available to you. You can find parts in the world or you have the chance to bring them into the game with you from your Steam Inventory – but that’s a whole other game mechanic that we’ll explore in the future 😉 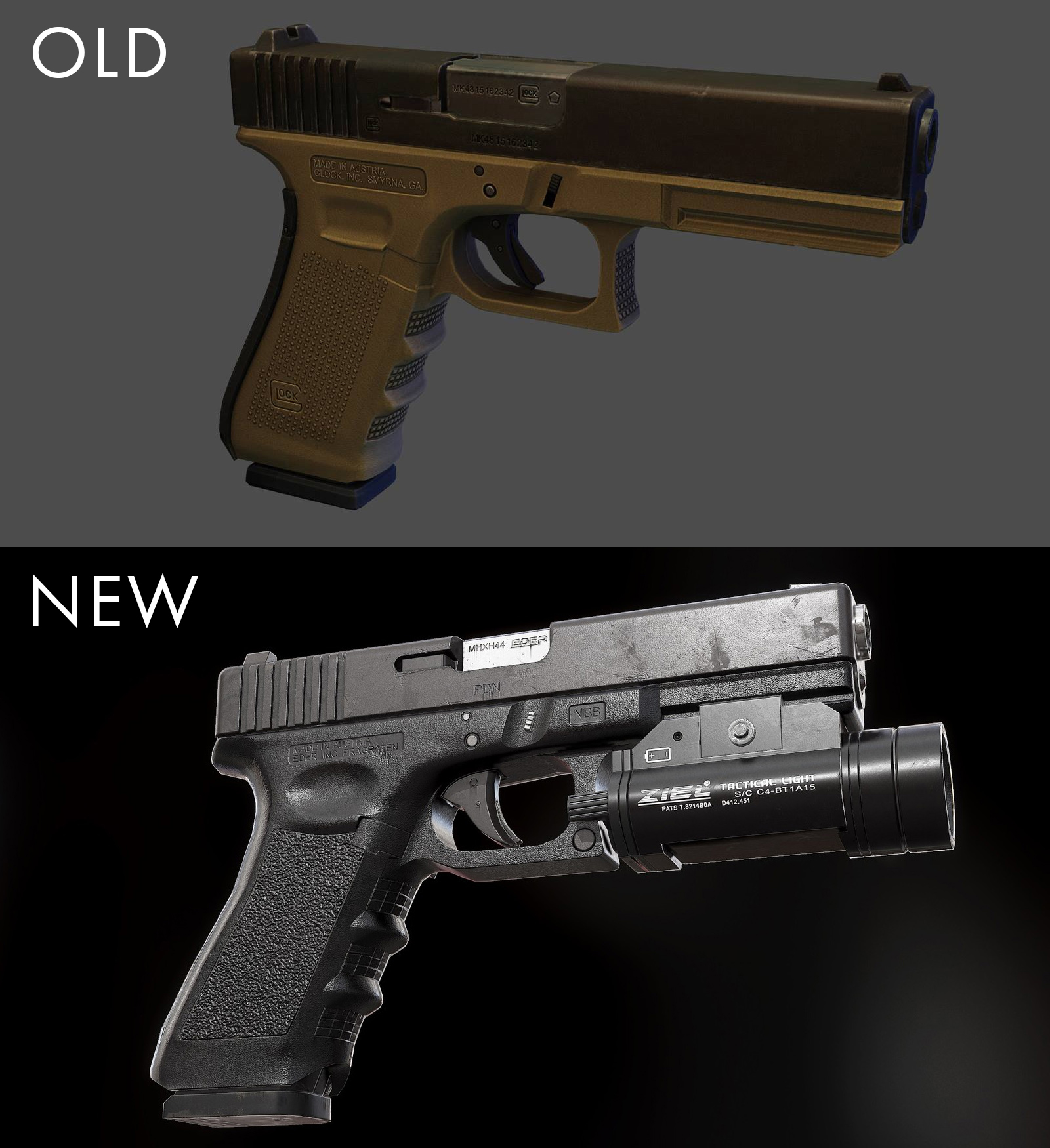 Another change with firearms this time around is that they will no longer “rest” in a hipfire idle state. Now, when you’re just standing around or milling about, your gun will be in a “rest idle” position held up at the side if a pistol or down in front of your body if a long gun. it’s a small change, and doesn’t impact much, but visually it’s a really nice addition that enhances your immersion.

Now don’t worry we haven’t forgotten about melee! There will be all your old favorites and some new additions as well. Once again their function will be similar: quick swings and charged attacks, shoving, throwing, and flashlight support for one-handed weapons. This time, though, certain melee weapons have “tool functions” so for example you can use a crowbar to prise a manhole cover.  Charged attacks have also seen a slight change; when you begin charging a weapon your character will quickly come to a complete stop, “planting” your feet down to ground yourself for a strong swing. This means you can’t just forever run around the map with a charged baseball bat looking for heads to knock off – you’re going to need to be a bit more strategic!

Melee weapons have also gotten an art overhaul, and we’ve included a few more side-by-side comparisons for you all!

We also have the ammoboxes – much like the guns, we needed to make up all fictional names but we wanted to try and stick as close to the color schemes you are all familiar with from the original game. We’ve also added a couple new calibers to the game including .40 S&W and 5.7mm – Check these out and you can let us know if you feel they are recognizable! (Keep in mind this is just a first pass of their art, and we’ll probably make a few boxes open with exposed bullets like in the first game.) So thank you for joining me today to talk about weapons, hopefully you’ve enjoyed taking a look at the art we’ve done and maybe you’re super pumped to use them when we launch the game! If you’ve ever wanted to make gun models like you see here, our buddy Tim Bergholz at Chamfer Zone  has a series of tutorials for 3D Studio Max and Substance Painter that’ll teach you how to be an art pro!

Join us next month for another Dev Blog, and we’ll end off with a huge array of images for you to enjoy!